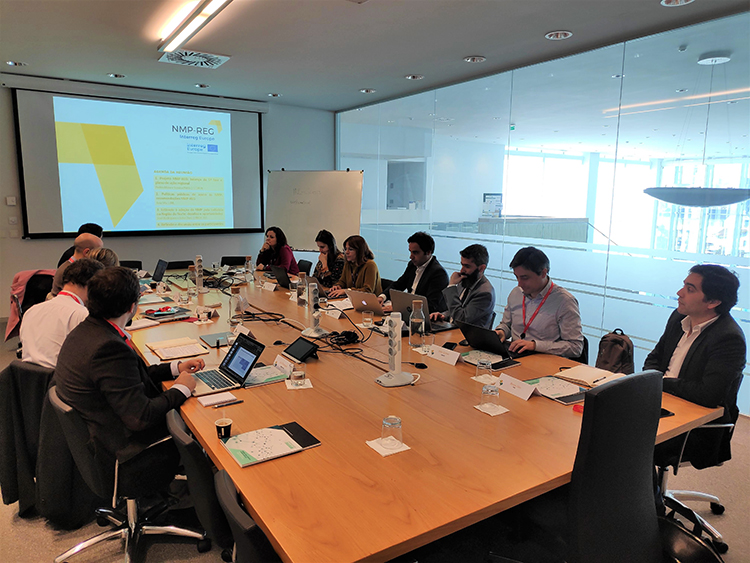 CeNTI participated in the last meeting of the regional stakeholder group of the first phase of the NMP-REG (Delivering Nanotechnologies, advanced Materials and Production to REGional manufacturing) project, which took place at INL - Iberian International Nanotechnology Laboratory.

The NMP-REG project, which brings together entities from five regions from five European countries, aims to bring together industrial companies and promote new bets in the Nanotechnology and New Materials sector.

This meeting brought together the entities that comprise the consortium and promote, in cooperation, the regional group of stakeholders from the North of Portugal, aimed at presenting the results of the first phase of the Interreg Europe project.

Throughout the meeting, the project's balance sheet and the action plan developed for the promotion of mechanisms to support the adoption of Nanotechnology, new materials and advanced production processes by the manufacturing industry of the Northern Region were discussed.

The session was open to all interested in the theme and was attended by entities from the North Region's scientific and technological system, management entities of competitiveness poles, clusters and public entities.

CeNTI highlighted in the Portuguese Media

Innovative projects with unique and disruptive functionalities, Made in Portugal. INStone,
more

The program, which discloses brands and reference entities, presented information about the Centre, its facilities, activities, and Projects, with a focus on
more

#Covid-19 CeNTI is developing a sensor that, incorporated in a protection mask, will monitor its user's breathing rhythm and identify possible changes and deviations from standard...
more

The project, developed by CeNTI, Tintex, HATA, CITEVE, and the
more
To use our services you must accept our Privacy note.
Privacy Note |